Bookmarks, Notes and Highlights Don't Appear in the App Drawer

Could anyone in the house help in getting a solution on how I can make “Bookmarks, Notes and Highlights” appear in the Drawer of an Android App?

I checked the boxes in the annotation but it didn’t appear. I initially built an app on SAB 9.3 and latter degraded to lower versions but it still checked out to be the same. I have also tried SAB 10.0 that was released on the 29th of June, 2022 to recompile and to see if it was a bug that has been fixed but it was still the same.

I have sent my project to one of the experts at SIL but I’ve not received any response since about 4 days now.

I’ll appreciate if anyone can help out on this and I will also appreciate if the software developers at SIL can look into into it if it was an error in the compiler development.

Thank you and GOD bless.

Hi Dappy @multichoicehub
That’s strange. Can you confirm that you are working on a Scripture app with Paratext files (SFM etc.)? Because if you build a Picture Story Book app, annotations don’t work. They only work if you have verses in the text.

Thanks for the concern.

I used MS Word and html document for the app development and this is the first time that I’ll experience it. Even after checking the boxes, nothing appeared in the Drawer. I think it’s a bug in SAB 10.0 from all that I can conclude.

No, I don’t think it is a bug. If you are using a word document, you don’t have chapter and verses. Annotations only work on Bible text or if you format your texts in the same way, like in a Paratext file.
Annotations only make sense if you can select verses in the text. The point of bookmarks or highlights is that you create for yourself a list of verses that you would like to find easily or that have a special meaning for you. If you are using a Word file, you can’t select verses because you don’t have a verse structure in the text. So unfortunately if you are using a Word file, currently the annotations options are not available, to my knowledge. 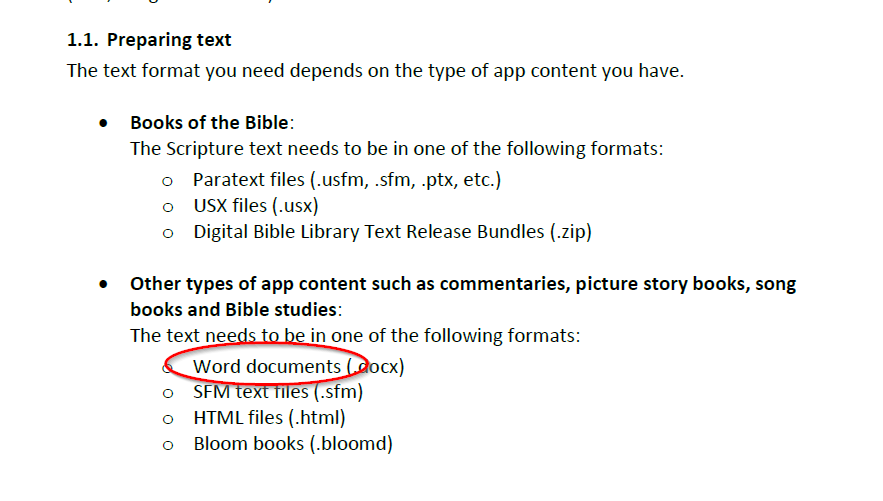 Here is a screenshot from the instructions in SAB > Help > 2. Building Apps.

If you are using Word files, than you are creating “other type of app”, not a Scripture app as such. Annotations only work on Scripture.

This is the first time that I’m experiencing that. I don’t know how to use Paratext and never used it before in all my projects. I’ve always used HTML, MS Word and even Txt for my projects whilst I break the MS Word into chapters. I have always disabled the “verse” functions but the Highlights, Notes and Bookmarks always come with my apps.

So, it is not about not using Paratext or verse functions sir…

That’s interesting. I also remember that in the past the annotations appeared in the drawer. But that was it, they just appeared but didn’t have a function if you have a non-Scripture app. My theory is that now the annotations don’t even appear if you don’t use Scripture text and that the developers did that on purpose. But I might be wrong…
In a Scripture app, you can click on a verse and it gets underlined and the annotations and sharing menu appears at the bottom. But I don’t think this works in an app built with Word files. Can you send me links to some apps that you have built? Perhaps I can learn something

Annotations (Bookmarks, Highlights, Notes) are based on scripture reference (need book, chapter, verse). That is how they are implemented.

Prior to SAB 9.1, these annotation items would show up in the navigation drawer if the app was created in SAB. On August 30, 2021, the code that checks to see whether there are verses included in the project. If your Word documents (docx files) don’t have the formatting that would convert to verses (I don’t know what would be required for that), then the annotation items wouldn’t work and they are not shown.

I looked at your project. It doesn’t have verses so the annotations don’t display.

Thank you very much for the responses sir…

I think the annotation items should be automatic in every app once the needed functions are checked.

For someone like me, I use HTML and MS Word for app development whenever I compile with SAB and I think we should all be considered to enjoy the functions irrespective of the format of document that we use for our development.

I’ll appreciate and suggest that you bring back the features as it were before SAB 9.1. SAB is still the best and simplest Android app compiler that I know and it should be all encompassing for users to use the functions that they opt for.

Thank you very much for the usual support.

The best way to get a feature added to SAB is to make a new topic as an SAB Feature Request. That way others can vote on the topic. It is clear it is a feature request.

Be concise about what you are wanting. If you want ten features then write 10 different posts.

i.e.
I request Annotations and Book marks to be available in non Scripture books built with SAB/RAB including from HTML and DOCX sources.

Thank you very much for the suggestion sir.

I’ll do that right away.