I’m building a song book with SAB. This is the first time I’ve noticed the styles that allow you to have different indents for poetry with or without verse numbers, and if it is a one- or two-digit verse number:

Nice! Unfortunately, if I put a period after a verse number (to provide a little more separation), that gets counted as a character in the verse number.

Those get counted as two-digit verse numbers. Could SAB just match the number at the beginning of the verse number, for counting the number of digits?

Alternatively, is there a way to get the CSS ::after element to work with SAB styles, so that I could specify to add “.” at the end of the span? Then I could leave the verse numbers as only numbers.

The third one should match what you see with your markup.

Here is the SFM: 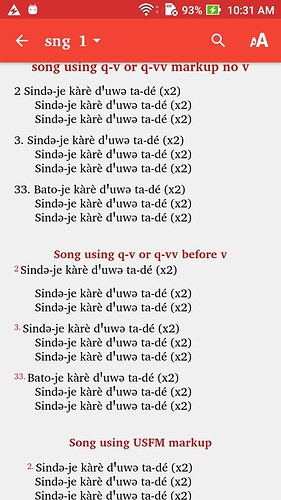 I am not following your statement: “Nice! Unfortunately, if I put a period after a verse number (to provide a little more separation), that gets counted as a character in the verse number.”

I did try and make a style `.v::after {content:".’} I had to do that in the .appdef but it did not work. Some things in SAB are controlled by programming rather than CSS. Chapters and Verse numbers have many controls so have programming behind them.

So which output is closest to what you want?

I believe the styles are applied so that any verse numbers found can be put into the margin, like this: 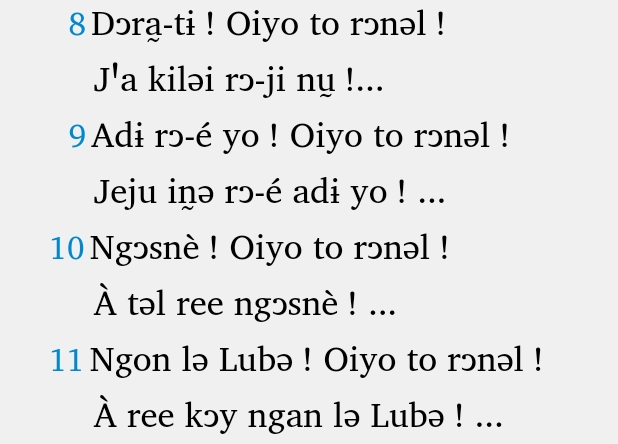 My “Unfortunately” is because a verse number of “9.” (i.e. with a period) is treated as a two-digit verse number. That means there is no outdent difference between “9.” and “10.”, and things don’t line up as nicely. If I don’t include a period after the verse number, then I can get things to work out nicely, as seen above, but there isn’t very much separation between the verse number and the text.

Your explanation is clear, I get/see what you mean.

Styles are linked to SFM markup everywhere else, so I’d be surprised if this is different. @richard can you clarify?

Without a period, the numbers are lining up as you want with standard USFM. So I suspect they are being programmatically handled not styled directly. The period messes up that number arrangement. I still think it is unrelated to the div.q-v style.

Yes, we decide programmatically whether to use q-v, q-vv or q-vvv styles depending on the number of digits in the verse number, in order to line them up in Bible poetry. This is not a bug, since USFM does not expect to find a period in the \v verse number.

I don’t think we intended for \v markers to be used in song books. Perhaps you could use user-defined styles to handle this situation?

Perhaps you could use user-defined styles to handle this situation?

If I did this, I wouldn’t get the benefit of the programmatic choice for which style to use, since your magic only happens on verse numbers…

Alternatively, is there any way to get the CSS ::after element to kick in, so that I could tell the verse number to put a period or other character after the verse number?