Hi everyone,
I just saw an announcement in the Google Developer account that seems pretty important!!
You can read the full policy announcement here
Basically, all existing apps that don’t target API 30 will not be served to users who are on API 30 or 31 starting from November 1st 2022!!
So it seems that if we want to make sure that users who have Android 11 and 12 phones can download our apps, we should update all apps that are older than August 2021 which is just over a year. It says that later in the year it will be possible to apply for a six months extension.
Correct me if I’m wrong!

I’m confused about how this affects users of older devices. There are android 8 phones still on sale around here. Does this mean that there will be no version / updates available for them, or is a targeted API different to a supported API?

Well, it says in the Google announcement that apps will not be available for devices running versions higher than the app’s target API. So for example, if your existing app in the store is API 28 (which is Android 9) then Android 10, 11, 12 and 13 users don’t see the apps. All older versions (including Android 8 phones) would see them. So Android 8 users would be fine if your app in the store is at least API 26.
I think updates are never a problem, wouldn’t you publish an update with a fairly recent version of SAB? This would mean that you reach all devices. And SAB apps are currently downward compatible to Android 4.1 (unless you change that in SAB) so it is not that you will lose users if you update your app with the latest SAB version.
Anyway, I would suggest to make sure that all apps on the store get updated to API 30 so that all potential users can see them.

You can already extend now until 1 May 2023. Go to the developer’s console and there will be a link about the Target API level in your Inbox if it is relevant to the app. Click on a button in that link and the date will automatically be extended to 1 May 2023.

Thanks. Do you know where the setting is exactly, if I can’t find the link again (I saw it once but now it’s gone).
Update:
Now I see, they are under “Inbox” around the date October 3, and I had to make sure no filters were applied.

It can be found like this too:
Go to your app > Publishing options > click “View details” at the bottom of the announcement 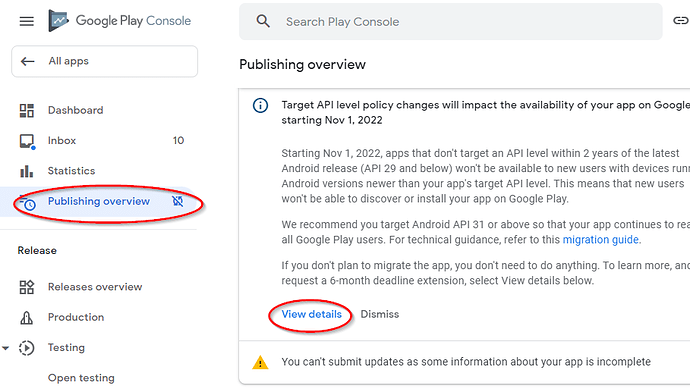 On the page that opens you will be able to tick the box to extend six months.