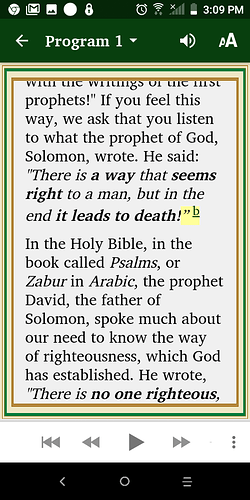 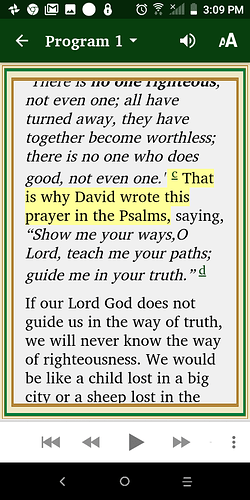 Screenshot_20191203-151012.png480×960 81.6 KB
There is always a space between the trailing quotation mark and the footnote, and a space following the footnote before the next sentence. However, in the app, sometimes there is no visible space.
Source files are Word docs. Another project I have with SFM files and similar situations highlights correctly.
Andrew_Shafe December 3, 2019, 11:26pm #2

Oh, and everything highlights and syncs correctly in HTML and the fine tuning, but of course gets off very quickly in the app.

Andrew it might not be relevant, but some of those are curly quotes and some are straight quotes. I’m having trouble telling which are working correctly and which are not, but I would try first going all curly on some that are giving you trouble and seeing what happens.

Again not sure but one one of them it seems like there’s space between the period and the quotes, but I’m not sure if that’s just the italics. If there are extra spaces obviously I would experiment with taking them out.

I’m having a different but perhaps related problem so interested to see what works in the end.

Does the SFM that is correct have a space before the footnote? In the NIV it does not have that.

I tried with and without the space. The interesting thing is that, in the phrases in the first two pictures, I cut and pasted the text and then just edited it, to make sure that the formatting was identical, but as you can see, the footnote appears right against the quotation mark in the first pic, and with a clear space in the second, and highlights differently.

I think I’ve found the solution, or at least a workaround. If I take out the italics, AND any bold text (I have to do both) within the quoted phrase, the highlighting works. I’m not sure why. The text I was given has a lot of formatting like this, so I hope they accept the changes. It is also quite inconsistent with its straight and curly quotes!