Here are some feature requests related to tasks I’ve been doing using Fine Tune Timings in SAB:
(I’ve copied these from where I had them burried in a different post.)

He’re one more item:
7. Add a button to bring the start of the line to the current location in the audio. For example, if I just played Mark 1:5c and paused the audio, if I click on the on a button left of 6a then 6a would now start at the current moment of the audio playback. Not sure the best short description of the button, but it would “align this phrase start at current moment of audio playback”.
The reason I think this would be helpful is that in many languages the words forward, backward, in front, behind are all abstract, and when training people to fine tune audio files I’ve noticed that my team tends to understand the opposite and end up pressing the wrong buttons for – , -, +, ++. Also when the timing gets way off, it’s not always easy to tell if it needs to move forward or backwards. So with a “Align” button you could simply play the previous phrase then hit the pause button where the next phrase needs to be highlighted. Someone could also quickly fine tune the timing files by simply listening to an entire audio and click on the align button left of each new line as it needs to be highlighted. The align button would move the start of the audio forward or backward as needed to align with the timing of the current audio playback.

@mcquayi and @richard is the the location where I’m supposed to post feature requests? I’ve typed up all my current ideas, but don’t know if I’ve put too many ideas in one message. They are all related to the Fine Tune Timings interface.

Thank you, Andy, for these feature requests. Yes, posting them here like you have done is good.

Here is one more item to add to this list to perfect the Fine Tune Timings HTML:

SAB Genesis 2 timing issue.JPG1642×690 133 KB
Here is one other example from Acts 9:19 (also split with one phrase before the subtitle and one phrase after the subtitle): 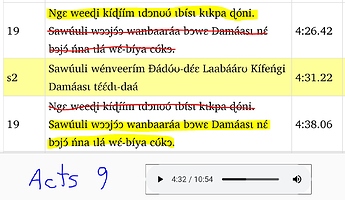 SAB timing problem verses split by s1 titles.JPG1873×1088 200 KB
In this second example I’ve drawn a red line through the text that should not be visible in the HTML. I’ve highlighted in yellow the parts of the verse that should show up in the HTML. For some reason it doesn’t see it at 19a and 19b, only all of 19, duplicated before and after the subtitle.

Note that in both cases that text is not actually duplicated before and after the s1 title. Also this appears to only be an issue in the Fine Tune Timings because when the apps are created there is no duplicated text, and the subtitles do show correctly. It’s just confusing for those who are trying to fine tune the timing files.

@richard It’s great to see these improvements already in the SAB 7.2, from July 9 - great fast work. I see the dev team kept my idea of ASDF for navigation, but replaced WE with P,N - which is logical for previous and next . The reason I had proposed W and E is their position directly above ASDF, and the idea of moving left (previous) and right (next). But having the letters P,N has it’s advantages as well. I guess the logic could be explained that the left hand (ASDF) is for adjusting the timing, where the right hand P,N moves the playback location within the larger text.