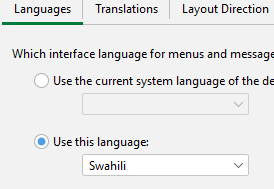 When I check these apps in the Google Play Console, they show Swahili as the default language. But installing the app on my phone from the Play Store app installs with English.

My phone is set to English, but I’ve used the same settings with other projects, and the apps install with the default language I’ve specified (ie French).

The only way I’ve been able to get these apps to install with Swahili was to remove the English interface and rebuild the app.

Is there something I’m missing?