Here is a wish list item I’ve been thinking about for a while - primarily for RAB but also applicable to SAB. I thought I’d draw it up, but this drawing is just an idea… 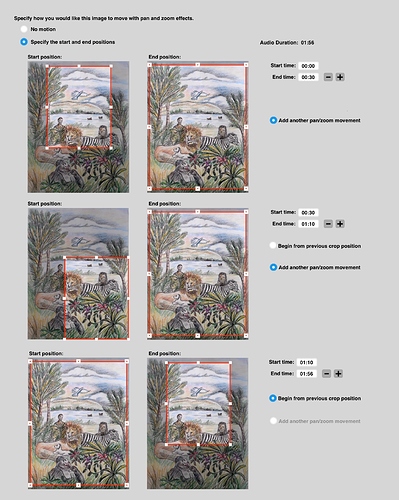 The reason for this request is that I have an RAB app that has 40 images and 40 accompanying audio files, each of which range from 1.5 minutes to 27 minutes in duration (the majority of audio files are around 5 to 7 minutes in duration). The Ken Burns effect in RAB/SAB does not work well with long audio durations - the movement is so slow that you don’t even notice movement. This idea is simply a way for app builders to build more interesting and customizable image sequences into their apps - especially if they have audio files longer than about 30sec.

I was also interested if SAB/RAB could be made to constrain the crop proportions one is creating. Currently it is impossible to create a rectangular crop and know precisely that the selected crop will actually display on the phone. (I understand that phones differ in their aspect ratios. In the app build process, RAB/SAB seems to address the differing aspect ratios of phones, by making a standard cropped image size (~25x32 for portrait view; haven’t measured the landscape crop size). Space is left around the image where it doesn’t fill the screen on a particular phone (that is - the image is neither stretched, nor are parts of the image lost outside of the screen.)) 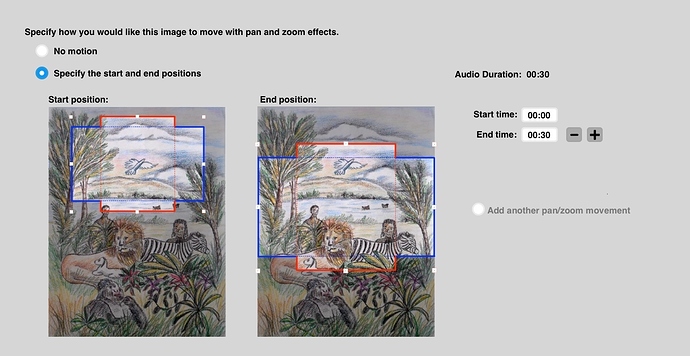 …these requests are aimed at the app builder having a better idea of what the precise end result will be on a phone, before clicking build.

I understand that these are wish list items that would require quite a deal of code to write. Big requests! I only hope that if you guys actually do build some of these features in, that they will get used to great effect in lots of apps that are built! Thanks for all your great work!

If others would also love to have access to features such as this or have comments about my requests, please comment below so the developers can know about the interest level in this.