Line Breaks in the Middle of Words

I’m not sure if this is an issue with all Indic fonts, but both the iPhone and Android apps are breaking the line in the middle of words 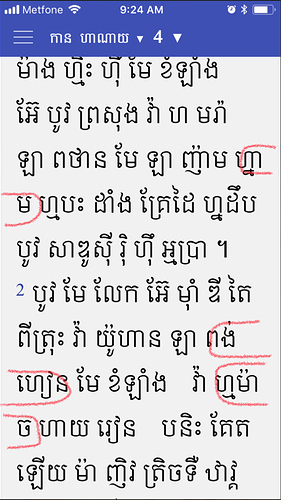 In you Interface where you set up your language you for the language code: 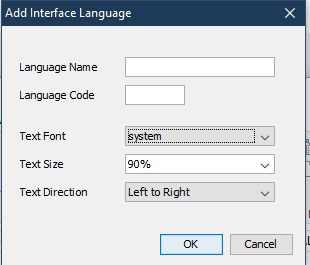 Enter your Language Name:
Enter your Language code:
This is usually your three letter ISO language code. But in this case use this format:
iso-u-lb-nodict
Replace the letters iso with your 3 letter ISO code. Look up in the Ethnologue.com if you don’t know what it is.
Text font should be font1 that is defined in your Fonts section and is the font used in the app to display the text.

For your language you should also use the Crosswalk that is found in Fonts > Font Handling tab. This will make the app bigger but it should display better.

Let us know how that goes.

Thank you for your suggestions. I believe I’ve made the changes you suggested, but the problem persists 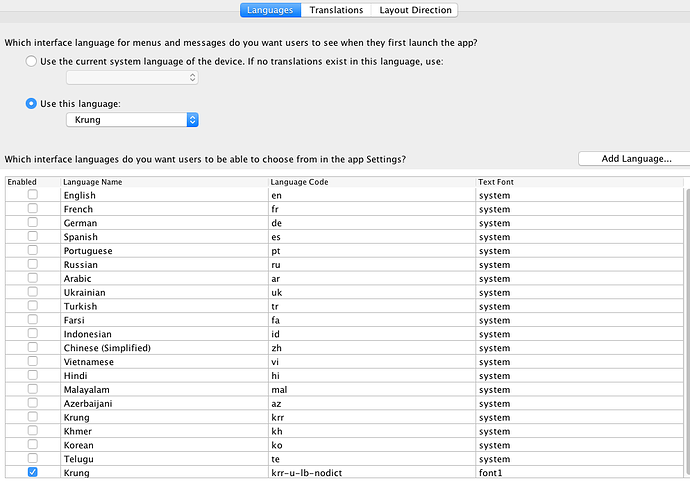 I was consulting an expert and did not get it all correct.

You can change your Interface language code back to krr

Let us know how it goes. Others may be following with interest.

If that does not work, I’ll ask you to share some of your text by private message. Then I can test.

Thank you again for your help with this
I believe I’ve followed the instructions correctly, but the problem still persists. Please double-check from my screen shot if I’ve added the style information in the correct location. 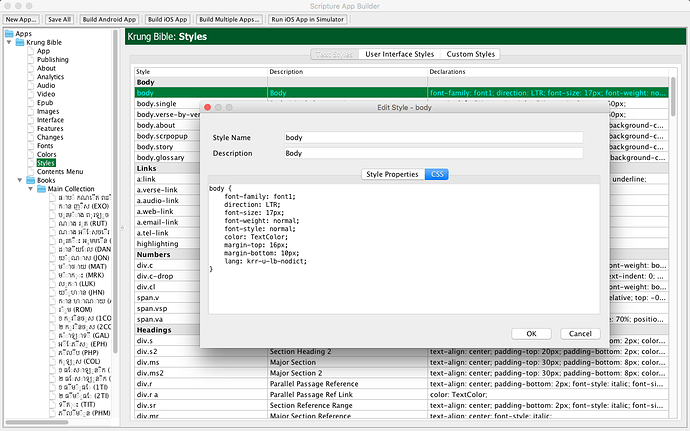 Can you confirm that Crosswalk is enabled?

Yes it is enabled, but I’m primarily testing this on the iPhone which as I understand it doesn’t use the Crosswalk viewer anyhow.

Yes those instructions were for Crosswalk. iOS is another animal. @ChrisHubbard any thoughts?

We can’t do crosswalk on iOS. @bkane, which types of phones will the intended users be using? If they will most likely be Android users then you should be testing with Android. You can purchase an inexpensive device for testing. There are emulators that you can use, but it is best to use a device similar to the ones that will be used by the intended users.

Thank you @ChrisHubbard . The iPhone is one of the target devices. Is crosswalk the only solution for solving this bug?
I’ve not yet tested the crosswalk build on an Android device, but will report back whether the bug persists with crosswalk after testing

Hi Ian and SAB community.
I too am having trouble with words breaking over lines. I have set the line in Styles as above with our language iso code but it still breaks. We are still using English as interface at present.
I don’t understand what Crosswalk is for but I tried it and just get a black screen.
Any ideas welcome.
Thanks
Mark Osborne

FYI, Crosswalk is replacement for the Web viewer component used in the Android app. It is a custom build of Chromium that has Graphite enabled so that Graphite fonts work on Android.

Unfortunately, there is a bug in the build of Crosswalk that we are using that causes it to have a black screen on Android 11+ on some phones (not all – works fine on my Google Pixel 3XL but not on my Samsung).

Unfortunately, I don’t have much experience with line breaking and can’t help there.

I think this issue is now being discussed in the following thread, as well:

SAB 9.3 Apps on Android 10 and 11: Can we disable wordbreaks Scripture App Builder

We are working with a language that makes use of Thai script, but used spaces to mark word boundaries. SAB will currently break words based upon Thai Orthography when you zoom in / out. Previously we’d use Crosswalk to get around that, but Crosswalk is not supported as of Android 10. Is there a way to instruct SAB to not apply the Thai orthography rules? Or, failing that, can we instruct SAB to not break text between spaces (U+0020)? This request is related to a specific language, but it is…

@EricP and I are working on the same language with a Khmer-based script and this is a persistent problem. (Microsoft Word has the same problem. LibreOffice doesn’t have the problem.)