I have a New Testament Android app with audio (no text synchronization yet). I’ve included the Sermon on the Mount (matt 5-7) within the app and the app opens to Matthew 5 when first installed.

If I navigate to a different chapter, start playing the audio (which needs to download from FCBH server - which itself has a long delay without initial indication that anything is happening), close the app and then re-open it, after the splash screen, there is a long delay (and sometimes a long delay with a black screen) before the app displays and the previous book/chapter is displayed.

I’ve noticed that if I close the app when I am at Matthew 5-7 (which as the audio included in the app), when I restart the app, it starts and displays without delay. But if the app opens to a book/chapter where audio is not included in the app, there is a long delay/black screen with delay. This makes me think it is related to the app looking for the audio in the phone (which is a Samsung S9+ with lots of storage - 128 GB internal and 128 GB microSD card external).

Anyone have any ideas or suggestions about how to troubleshoot or remove the delay or change audio/storage settings? Anyone know where the audio that’s downloaded is stored? Is it in the same location as the app is installed?

I haven’t received any negative feedback that this happens to other people using the app but I don’t have great feedback channels and perhaps most people don’t have a phone with as large of storage.

Turn off this setting with the red mark beside it and see if that speeds things up. 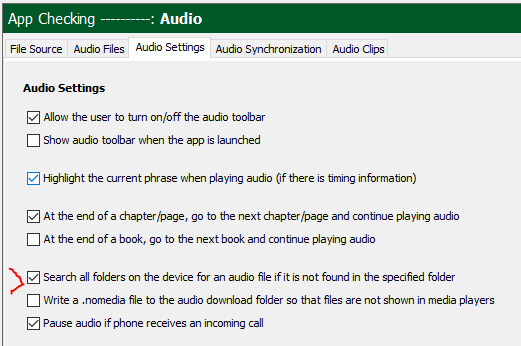 It has down sides.

Thanks for this idea. Haven’t tried it yet.

What are the potential down side?

My app has just 3 chapters of audio included in the app and the rest is set up to stream (still figuring that out) or download from FCBH so it shouldn’t need to go looking in random places of the phone, should it?