Just want to let the community know about a resource which can help one get a foothold on Regular Expression and use it in the ‘Changes’ tab of SAB, to powerful effect…

I didn’t initially know anything about Regular Expression but after a few hours on this site, I had enough understanding of it to create a regular expression to remove the introduction material from each book in an SAB project.

Hope this helps some people.

There are probably better ways to write it…
it’s the only line I could get to work for me.

Thanks a lot for sharing this. I had been looking for resources on Regex before… it’s great to have this kind of tutorial.

I just wanted to share a couple of Regex thoughts, so you can understand better the [\W\w]* expression mentioned in this thread. Here are the definitions of those two special sets:

So putting them together into a character class (surrounded by square brackets) is like saying:

What you are really trying to do is match any character. There is a Regex character already for that (almost)… it’s the period, “.” That character matches any character… BUT it does not match a newline character. So the following expression is simpler and similar (but not identical) to what you have above:

The only difference between that and [\W\w]* is that this expression matches newline characters as well. Which is why it can go along, slurping up any character it sees until it gets to chapter 1. To do a similar thing with the period, you’d have to do something like this:

This finds (any number of characters followed by a newline), repeated 0 or more times. So in a sense the [\W\w]* may be a bit simpler. Especially since end of lines can be a little funny between Windows/Linux, etc. If \n doesn’t work, you could try \r\n or even \r as other possibilities. But my guess is that what I have above should work.

But there is a better way to define your ending condition. You said to look for \c followed by a space followed by a one and a word-breaking character. Do you know why you had to add that word-breaking character at the end? It’s because the star * (zero or more wildcard) is “greedy” (as is the plus +, one or more wildcard) and slurps up as much data as it can. So if you have a book with \c 19, or even \c 150, it would suck up everything until there, if you only specified \c\s1.

But there is a better way. If you put a question mark after the star, it makes it just look for the first occurrence, i.e. makes it non-greedy. So if you just want it to find the first \c in the text and stop there, you could use this:

But my instinct would be to use the other expression:

That reads a little better to me: Find \imt followed by lines of characters (ending with newlines) until you find a \c. Note that this search is slightly different than the previous one: it will only find \c at the beginning of a line. That’s normally where it should be anyway, but it’s important to be able to understand small differences in these regular expressions.

Hey, this is great! Thanks for sharing. I’ve learnt some things and like your expression better than mine - much cleaner. Thanks!

https://regex101.com is another good site to test and debug regular expression. It has a nice interface for explaining what the regular expression is doing and colored matching of parts. It was recommended to my by one of the Paratext developers.

Hey, that site looks awesome! Thanks!

I need to enter (\xt…\xt* ) for all cross references, Is there a way by using regex for that?

@dlear Please expand on your request. Give an example of what you want changed and to what.

If you want to add \xt … \xt* to any reference in the text, you would need up to 66 regular expressions (more if you have references to Deuterocanonical books). SAB already does a fairly good job of linking text that looks like a reference based on you book names and abbreviations.

expand on your request. Give

Thank you for your help,
Yes, I need to add \xt… \xt * to any reference in the text. Is there an easy way to do that?
could you help me please?

There is no easy way. You could setup a lot of changes in SAB, but I would suggest adding the \xt in Paratext so that they can be checked for errors there. Paratext has RegEx Pal: 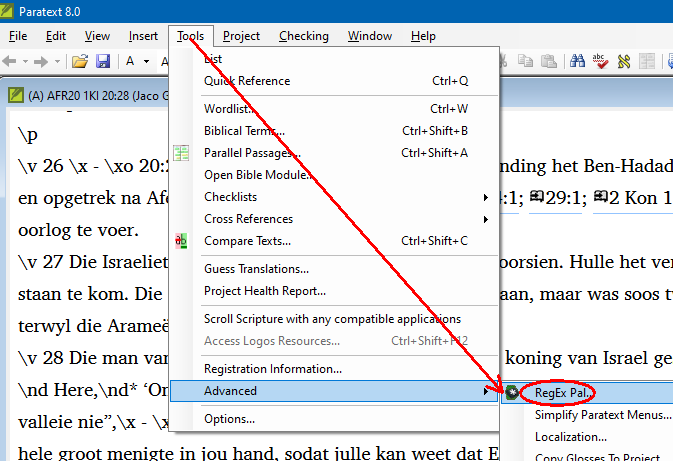 NOTE: Use this with caution. It could “break” your text. MAKE SURE YOU MAKE A BACKUP OF YOUR TEXT BEFORE PROCEEDING.

You could add multiple book names in there, but as you can see in the example, the text already has \xt's surrounding references across multiple books in reference tags, so adding book specific xt's to this is not a good idea in this case. I am just using it to demonstrate RegEx Pal.

You will have to experiment. There are always exceptions to the structure/form that your regex will find, which will not be changed.

You will have to experiment. There are always exceptions to the structure/form that your regex will find, which will not be changed.

Dear Brother,
Thank you in advance,
In Kurdish we have no abbreviations for the names of the books.
But as you see in the screenshot, the verse number does not enter the link. 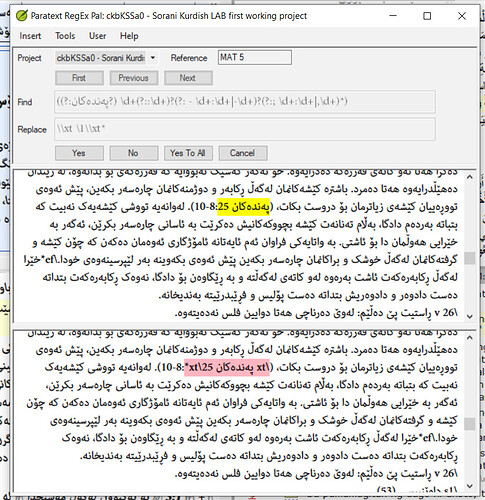 (We use spaces in chapter ranges (and e-dash or em-dash instead of hyphens).
You will have to adjust accordingly.) 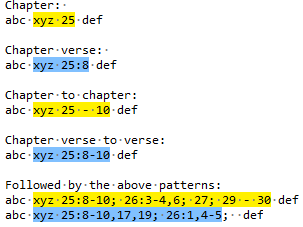