I have a couple of issues in a RTL app around numerals. I have selected Eastern Arabic for numerals to get Hindi numerals. That works fine for chapter and verse numbers. (Although for book names I had to insert numerals from U+0660 to force Hindi numerals in the book names, e.g. 1 Samuel.) But when I open a footnote, the numerals go back to Default, both for the footnote reference and any cross-references in the footnote: 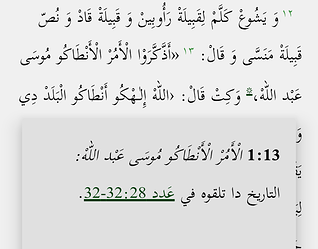 You can see that the reference is also messed up (it tries to present it in LTR format), but if I tap on the cross-reference link, it takes me to the right reference, and it actually brings that up with Hindi numerals (displayed properly):

Is this a known issue? Is there a fix or work-around?

Hello, I’m afraid I have a question instead of an answer.
How do you select ‘Eastern Arabic for numerals’ in the first place? I cannot see that option anywhere.
Many thanks,
Craig

It is in the Collection’s Styles tab 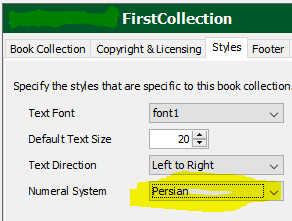 Thanks so much! I thought I had check everywhere.
Now I am also looking for a solution to Jeff’s problem. I know in typing Kurdish in a normal document to get John 3:16, you must put a space after the colon or else it gives you 16:3. see examples below, they are typed identically apart from the space:
یۆحەنا ٣:١٦
یۆحەنا ٣: ١٦
Could you add a space in the usx files after the colon?
The Kurdish says First Samuel etc which avoids the problem with book names. (i doubt they had SAB in mind when making that decision but it at least avoids the problem.)

I work in SAB 6.1 MAC and NOT in Paratext … but I get SFM form a script that deals with and XML file. But now I see that I am not alone struggling with cross-references in RTL … for half and year and no solution despite many help efforts form various sides. I do use Arabic numbers but the problems are similar. The problem described about Joh. 3:16 by Craig is the same here. It is similar to Jeff problems with the reference of ‘Adad’ (Numbers)
My question is if there is anybody working in RTL arabic script and cross-references who has a reliable result with simple and more complicated cross-references in his APP? If these cross-references are in Paratext, is it possible to export such a working set for the whole bible so that we could use that in our project and only change the abbreviations?
Did you test your corrections-references in : https://r12a.github.io/uniview/#title
I got this from Corey … you can paste your chain of cross-references in the box and press the down arrow and see what hidden and non-hidden characters form the whole string … very helpful for analysis!

As I do not see response yet to this post, I assume that my guess is right and that SAB does not produce workable arabic cross-references so far … !!?

We are not working in Paratext, but with FMP (FilemakerPro) but I think the problems are the same and I think there is a bug in the interpretation of RTL chapter and verse numbers by SAB (I am using version SAB 6.2 MacOS) e.g. Gen. 11:12.

I enclose a screenshot where you can see the same string of cross-references at v2, v3 and v4. You have to read the string starting at the right side. They display differently. I will focus on the string in vs. 2.

In vs. 2 it reads as the first cross-reference Job 38:4 (so visually from RTL: 4:38 boJ).
So coming from the right (the reading direction) and going to the left - if you think consistently (starting to think in LTR then flipping it from there to RTL) you would say from what you see in vs. 2 (so visually) is chapter 38 and then verse 4 more to the left. But NO!
SAB takes this as chapter 4 and verse 38. If I change the order, again it switches verse and chapter and makes 38 the chapter and 4 the verse. I know what it takes for chapter when I click the cross-references and see it leads me to the chapter number which actually is the verse number at the left side (visually) of the colon,
There is a contrast between the display in SAB (source) and the function each element left and right from the colon should have. The number most to the right in the display should interpreted by SAB as the chapter number and the number left from the colon should be interpreted as the verse.

This happens also in the \xo part but I was able to force that the other way around starting from FMP (though of course this is the same sort of bug - see above CraigN), but I cannot do that for the cross-references themselves.

The RTL cross-references are a long pending issue and I hope we can solve this together no matter whether input is from Paratext or FMP, because I guess the problem is the same.

I would like to revive this topic… The problem still exists in the latest SAB: 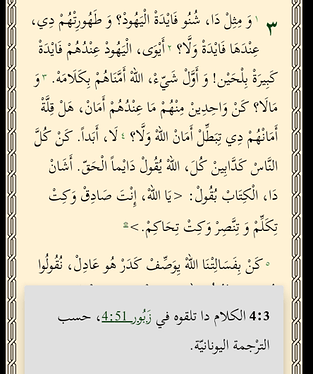 Note that the numerals all appear in the correct order, even though there is no “space after the colon” (as suggested by one person above). I assume that means that a RTL mark has been inserted in the proper place in the reference, which is the proper way to make sure that the reference is in the right order.

I want to also point out a related problem, which may actually be helpful in finding a solution. Any numerals that are in the text are also NOT in the specified Numeral System:

Thanks for your help.

My friend wrote a Python script that got rid of all the English numerals in the text and footnotes. For some reason numbers in book intros (like ‘written in 55 AD’) and numbers in footnotes (like ‘1 drachma…’) and the cross-references themselves were English. If you try to find and replace in Notepad++ or with SAB’s own replace feature it changes the formatting numbers as well which you of course do not want to do.
His script only changed the numbers that we wanted to change and that is what we currently have on our live app.

So when do you use that script? In what context of the publication process?

I would also like to know the answers to these questions. Do you use the Python script to create new versions of the Paratext text files in a temporary location, and then import those files into SAB?

@CraigN Would you be willing to share the Python script, by attaching it to this thread? I have an idea how I would write it, but it would be interesting to see what the author did.

Here’s an interesting idea - expand the Changes tool to allow not only RegEx changes, but also the running of a Python script.

I sent all 66+ usx files to him and he ran them all through the script and sent them back.
So yes, it creates a new version of the files. So if the translators update the text and send me new usx files, I have to do it again.
It can be done at any point in the process, I built the app with the original usx files from DBL, I found the English numbers and asked him to fix it. Once I had the new (post-python) usx files, I simply added those books and it replaced the old ones.
We would be happy to share it, I’ll have him send it to me.

Here is what he says:
‘The latest version is not a Python script anymore.
Here is the link to the GitHub repository, they can download the source code from there.’
GitHub - keesjankoster/replace: Replace digits in Kurdish Bible to Kurdish script

Thanks for sharing that. It is a C# script that processes the files. As mentioned, it processes the files and produces new files, which then need to be loaded into SAB. I think I’m gearing up to a SAB feature request that allows more flexibility in the changes, maybe even allowing an outside script to run…

But I don’t want to lose track of the fact that there is a bug report here. As mentioned above:

Can someone confirm that this has been noted? There are quite a lot of Arabic script apps being produced, so I would suggest that this is fairly important to get resolved.