SAB 4.7 MAC GRID with books RTL is not fully RTL

This is a screenshot of the matrix of a RTL APP … the blocks of the column on the left side should be on the right side etc. The text of the abbreviations in Arabic script (but not Arabic language) are ok. from RTL.
I have set INTERFACE on RTL …
Am I the only one having this problem in SAB 4.7 ?
Note also that the headers of each block (like Booklets etc.) are also on the Left side instead of on the Right side even if they are in Arabic Script of which I have some in the Grid. I think this was already imported as a bug, but is it going to be fixed in 4.7.1?

@joop,
Several months ago, using an earlier version of SAB, I had the same issue. I believe the solution was to have the Crosswalk viewer component enabled (found in Fonts/Font Handling).

As a test, I built the same app again with crosswalk disabled. It works now, actually better than if Crosswalk is enabled. Here in the screenshots you can see that the headers are on the wrong side when crosswalk is enabled, and correct when it is not. Also, the book/chapter/verse tabs are not listed in the crosswalk enabled version. 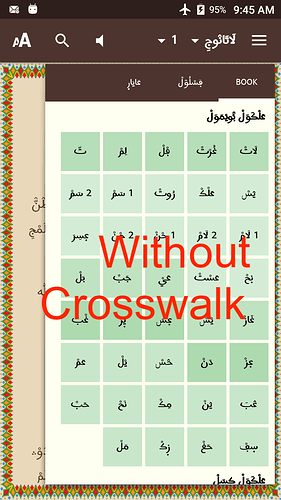 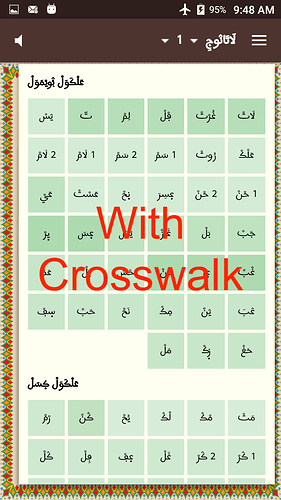 I’m sorry, this doesn’t help you too much. What if you changed your headers to Arabic? Maybe everything would shift to RTL. If that doesn’t fix it, let me know, and I can try to dig deeper into the settings I have for this app.

That is confusing since the screen shot is of an Android but the Title says it is Mac.

Things can be styled at app level, collection level and at book level.
If collection level styles are in use, are they correct?
Then check app level Styles and Interface.
Check out the app Interface options. You probably want the last one unless you always want RTL.

For mixed content direction the last may be best option.