At some point, the SAB interface stopped displaying Khmer characters (selectively!). Here’s a screenshot (I’m using 8.1 on a Windows 10 machine) – areas where the characters don’t show are circled, places where the selfsame characters do show are highlighted in yellow. 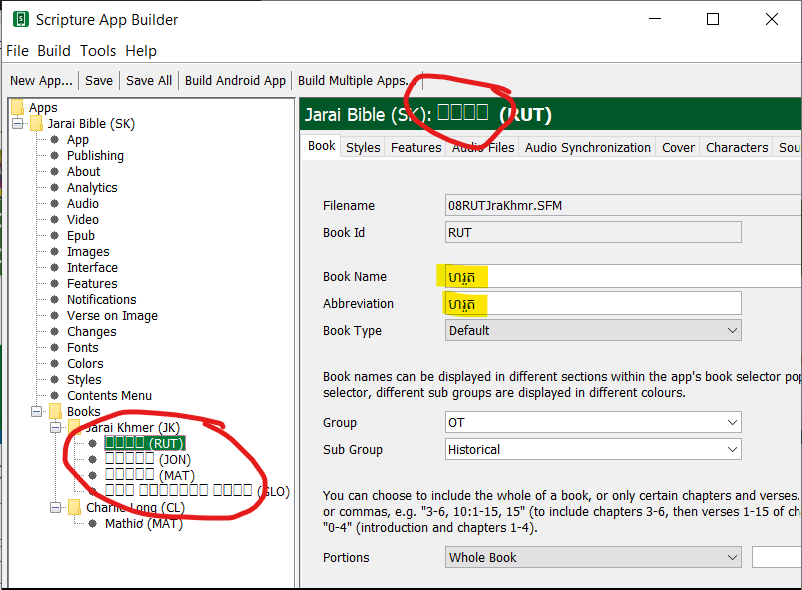 Can you post an image of your Fonts > Font Files section?

Let me know what else you need.

Note that we added “Noto Sans Khmer” by specifying font files. Note, too, that the app can’t look into the C:\Windows\Fonts folder (see below – it appears empty), so I had to copy the two relevant files onto the Desktop, and select them from there. (I subsequently deleted the font files from the Desktop on the assumption that SAB stores a copy somewhere.)

[I’m still allowed only one image per post, so the image that would go here will go in a subsequent post.]

An additional UI comment: the instruction to “choose font subsets that contain the characters you need” is not clear to me. I know how to select just the, say, Roman subset (because it’s a separate file), but the app doesn’t seem to give any way to choose just the subset of characters used in the app. Or perhaps that’s what is meant by “subset” – only the WEIGHTS used in the app (e.g., Roman and Bold)?

Here’s the image I couldn’t include in the previous post.

I think that the font used to display the Khmer is the first one. rom in your Font list. Try deleting those two then restarting SAB and see if that fixes the font issue. Then Add rom again.

Fonts cannot be added from the installed Fonts folder.

Charis and some other fonts have subsets in the main list of fonts. Choosing one of those keeps the font installed in the app, smaller.

Resolved. Thanks for the quick reply!

(And thanks for explanation of subsets – I hadn’t paid attention to them in the list since I was selecting files.)