Songs of Praise in SAB

I would like the feature where Songs of Praise could be accessed within the Bible app. We have 15 local Songs of Praise on the cloud and are being utilised on our Bible Web site but it would be nice if it could be accessible from the app as a special book mark or as a category of it’s on in the drop down window where the Biblical Books are located (eg: Genesis -Revelation)

You can include your Songs in the Bible app and link that way.

The developers are working on linking between apps.

You may want to look at this link in the Community: Deep Linking Into SAB

If you want to include songs as pages inside the app, there are instructions on how to do this in section 14, “Song Books”, in the SAB “Building Apps” documentation.

Hi Richard,
If I create a songs of paise audio streaming page within SAB and have it sitting after the glossary of our Bible app. Can I put in a permanent bookmark which will appear if someone installs our bible app and if they open bookmarks they will see it there. If they click on it they will go directly to the audio streaming page. Then people could pick one of 16 songs of praises we have and listen to them? I want to do the same for our vidoes (ie: Jesus film which we have broken up into 12 sections). Is it possible for a permanent bookmark which I could put into the app.

This will enhance our app and hoping when we update our iOS Apple will not take our app off Apple itunes/istore.

If you use the Contents menu you could have a button to go to Scripture and one to go to songs. That would be much easier for the users to find the songs than buried in the bookmarks.

Another way is to put in Markdown style links to have a song index on a page and link to the songs. Also easier to spot than hidden in bookmarks.

The problem is I have the entire NT and Genesis 1-16 present in the menu. At the moment I have videos listed right at the beginning of NT because it is the Jesus Film. If I put songs of praise after Glossary (at the end of NT) it is hard to find and see. I want these two items right in your face after you install the app for the first time or have done an update. Why? For 2 reasons. (i) Evangelistic tool: drawing people into the app. 2. Because I will do an update for our app on Apple iTune/iStore. We haven’t updated it for 3 years because Apple was pulling any apps which have only scriptures on them off their store when the first update occurred. I want Apple to look at our app and say this is versatile and not just a book. It can read to you, it has videos, it has songs. We will accept this update.

What we do in one of the apps in West Africa is to add the ‘Song Book’ as the first book in the book collection. It appears at the top of the Books selector and so is easy to find.

You could also use a nested Contents menu, with the songbook, NT, Genesis and Glossary as four entries, then the whole NT book list nested under NT.

@LBible you are talking about something different to @Andrew_Shafe. What he is talking about is the Contents Menu section on the left of SAB just above Books. Like in the image below:

You need to consider that as an option. 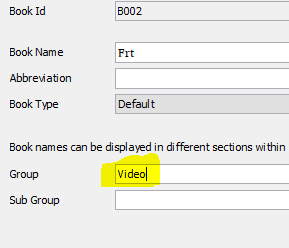 But to get that to display correctly you have to go to the Interface section, Translations tab.
Select the Interface language you want to work on
Scroll to the bottom and look for Book_Group_Video on the left and provide a translation for that on the right. Like Below:

I’ve worked out what Andrew did by what you have said. But when I install the app I don’t see videos or songs on the menu.

I’m exploring what I have done by having Video and Songs as a Book Group Video and Song Group Video. Is there anyway of having a picture within the Songs Book. Up to now my picture is not showing in the app but within Paratext it is.

Have you put the picture into Images > Illusions?

Am I seeing things?

…or has SAB changed significantly since I last looked at it?

It used to have Illustrations

I had the image in Thumbnail. I’ve now moved it into Illustrations. I will try it out and see if it appears in my app. Thanks for bring this to my attention

The image hasn’t yet appeared in the songs category even after putting it into Illustrations. Maybe I have something wrong with the SMF. Here is what I’ve got in Paratext.

In this context you can just use the simpler form:

I’ve placed the jpg file in the illustrations folder in App Builder, I’ve made the changes you suggested above but my picture doesn’t show in my app when I open it in my smart phone. Any other suggestions I might be doing something wrong?

In the books Genesis, Matthew-Revelation and Glossary my pictures show up in the app on my smart phone but as up to now it isn’t showing up in the Song Book. I copied the \fig reference for one of the pictures which appears in Matthew and stuck it into the Song Book to see if it appears. It doesn’t.

Should the Song Book show pictures (Maybe it doesn’t)?

@LBible I’ll send you my details by personal message. I need to get a copy of your project. to look at.

If the book type is set to Hymnbook you can change it manually to Default. See if that makes a difference to the book visibility.