Syntax for printing a range of verses from a single chapter

What’s the syntax to print a range of verses from a chapter? The pop-up help covers a contiguous range, but not discontiguous ones.

This seems to be a bug/regression that you have uncovered for us. We will look into it as soon as we are able and release a new version.
And I also wonder whether we actually have the ability to handle verse segments such as 1b…

I haven’t tried this with the newish “range of verses” option, but specifying verse segments in a Bible Module worked back in March IFF:

I’m attaching a sample that we printed with ptxprint. Where a \v segment was specified in the module but missing in the text, we either got the entire verse repeated for each specified module ref including that verse#, or the entire ref was omitted. I know I’ve seen both behaviors but I don’t remember what the difference was: I think it went one way when I printed the XXA Book on the ptxprint Basic tab, and the other way when I specified to print the Module. 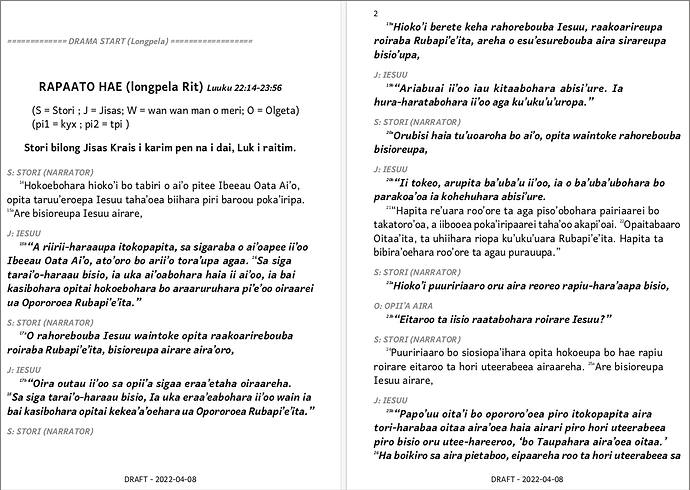 Check to make sure your verse segments are marked in the text. I discovered the hard way that ptxprint can’t split up verses intelligently on its own!

The downside of this is, of course, that these verse segments will display in any publication; unless they can be filtered out by one of the ptxprint control files, perhaps? We put them into the Passion narrative in LUK so we could print the Lectionary, and I’m not going to remove them until I have to, but I don’t think we want them in a final NT publication.

@Kim_Blewett I hadn’t wanted to create a Bible Module just for getting a printout of the passages to enable checking. If it came to that, I think I would just use a PDF editor to ‘cross out’ the repeated instances that PTXprint produces to avoid confusing the translators. Thanks for flagging that as an option, though!

Well, my theory was that the “b”, if not present in the text, might cause multiple copies to be output. But I just now tried specifying a verse segment that was missing from my text and it was OK. So I’m guessing it’s the three separate segments from the same chapter—that this multi-book function can’t handle it, perhaps?

I recommend that you use a module spec for this. You can just keep a temporary module loaded in one of your extra books; modify it when you need to print a mixed selection like this, then change the references next time.

On the other hand, if the verses you skipped here in EXO 15 are still blank you might just have it print the whole chapter, ticking “Hide empty verses” on the Body tab.

This seems to be a bug/regression that you have uncovered for us. We will look into it as soon as we are able and release a new version.

This has now been fixed and will be available in the next released version (2.2.17 onward).