Does SAB support USFM 3.0? Specifically, we use the ruby tag “\rb” for our Japanese. Is this supported in the latest version of SAB?

No that I am aware of but I’ll check.

I built our Japanese app with the ruby tags and it looks like SAB does not yet support SFM v3. Is there a known time frame that SFM v3 will be fully supported in SAB? Our Japanese app will have to live in limbo until it does.

How do you want that to be presented in the app? Can you include some images of what you are expecting it to look like?
You are really just embedding a character representation of the Han character. So it does not need to be visible the whole time, only when needed. The question is do you make those source characters differently to the other characters so the user can see which ones have extra information.

As a workaround you could make a glossary item of each Ruby annotation.

Would become in the text:

And then in the GLO back matter, you would have:

That would bring up a popup of the metadata that is in your Ruby SFM.

You could use Changes to take your \rb markup and change it to \w but you also need to extract the Ruby character strings to sort and put in the GLO glossary file. That would not be too hard using scripting.

If you have a Glossary already then that may not work.

Can you start a new post and make it a Feature Request for SAB to support USFM3 and specifically the \rb marker.

The way that the ruby code needs to display for us in the app is the tagged text appearing above the normal next it’s next to (see image, ruby text circled in red). We’re on Paratext 9 and it natively supports SFM v3 including the ruby tags, so we hope that SAB will follow suit and fully support SFM v3 as soon as possible.

I’ll do as you suggested and put in a feature request for SFM v3 and \rb marker. Thank you for your help! 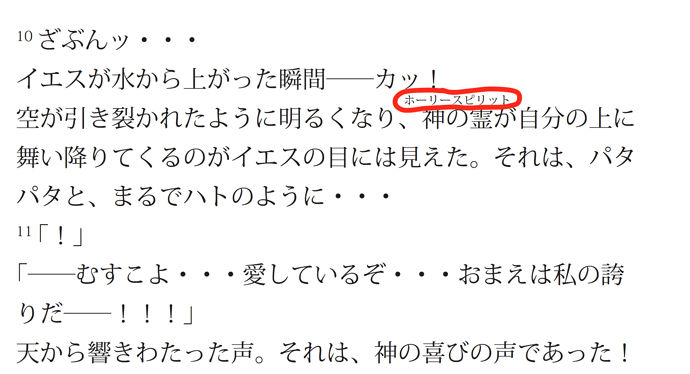 Thanks that is helpful. Though I have no idea which character or string of characters it is annotating on the bottom.

Another workaround: Convert the output to an ePub. An ePub is XHTML with several other files all zipped together. Each chapter would have its own file within the ZIP. HTML 5 defines a Ruby element so it should be possible. The SAB ePub export does not handle USFM3 either yet.

I am simulating what you have but with English. But I get a space after the selected character when the ruby markup is only on one character.

I’ll use that to generate an epub and see how that goes.

I have added lack USFM 3 support to the bug list to be fixed. Since Paratext 9 supports USFM 3, it is reasonable to expect that SAB support it too.

While it may not be in the next release, we are planning to have full USFM 3 support by late March.

Wonderful, I look forward to the above update when it rolls out. Thank you so much for your help with this!

Ruby glossing will be in the 6.2 release along with some other USFM3 features. The developers are just fixing some build issues, but it should be out any day now.

EXCELLENT!!! I’m on pins and needles to try it out.

If you send me your project vial dropbox or google drive, I can give a try and share the results before we release. You can send a private message through the community or email (chris_hubbard at sil dot org).

Hi Chris, I just emailed you a Dropbox link of our project. Thank you.