I would love to see some well-formatted examples of front matter that users are successfully using with PTXPrint.

@John_Nystrom In the absence of any replies, I’ll do my best to answer your question - albeit with my limited experience.

The USFM specification for the FRT book uses a \periph marker to indicate the different elements (usually on different pages) that make up the front matter of a publication. For PTXprint to mimic that behaviour, I’d suggest adding a rule to your PrintDraftChanges.txt file (accessed through the Advanced tab in PTXprint) to add a page break at each \periph marker:

The other issue is getting adequate spacing before the title on the 1st page, and then between the various elements on the verso page. I also tried adding multiple \b (blank line) markers above the \mt but found that they don’t do anything - not until you have a marker above them. So I inserted a bank \mt at the top, followed by several \b markers to bring the title down. Similarly, \b between the various \pc elements on the verso page allowed me to spread things out as needed.

Note that I have used the magic code to generate the illustration credits information (as can be done with a colophon):

The end result looked like the sample shown below (click to enlarge). Note that the table of contents in this sample was NOT auto-generated, but that certainly is another option if helpful using the PTXprint settings on the Body tab.

Here’s an extract showing what the USFM in FRT looks like:

And if you wish to copy-and-paste the example for your FRT book then use the plain-text version below:

I hope this helps as you try to make things work for your project.

In the example above, the code prior to \zimagecopyrights is \pc = Centered Paragraph. Have you tried using \p (normal indented paragraph) or \m (margin paragraph with no 1st line indentation) in place of \pc ?

Yes I tried both of those, no change.

Yes, you are right @MikeB. I can see why that is happening. We’ll work on fixing that for 1.9.1 - along with a few other bugs you’ve raised in the last week or so.

Fixed, and will be available in 1.9.1. It was a tricky one; good catch! Here’s a rather hypothetical sample output showing that it now works like it is supposed to: 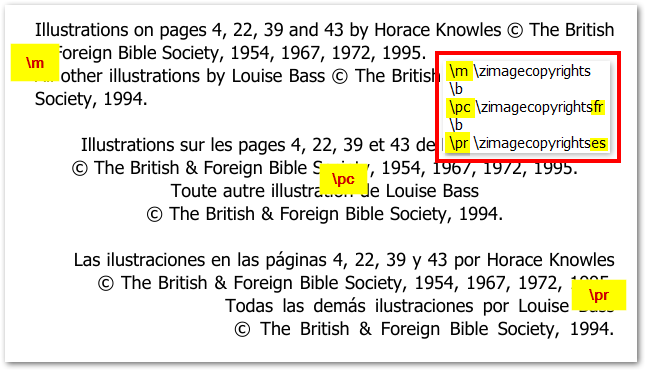 Interestingly, if you need a work around for the current version 1.9 which you’re using, then just as ‘en’ to the end of \zimagecopyrights i.e. \zimagecopyrightsen and it will behave itself,

Thanks for the great work on PTXprint! Always look forward to the next update. Gets better and better. And this fix will be helpful too.

But I have found it better for us to have front matter formatted at a smaller font size than main translation text. If you feel the same, then maybe using the \pc style is less than ideal.

Unfortunately, there is no suggested SF markers to use for front matter like this. Might I propose we create a new standard style like say \ipc (introduction centered paragraph) or maybe \fmpc (front matter centered paragraph), as a better way to handle these? I.e. Could we get a set of “front matter” styles that can be used and tweaked, without having any effect on the main body of the document?

(I know Paratext does maintain a separate style sheet for front and back matter from the main style sheet for scripture text. But this is outside of PTXprint and opaque to most users. Also, would it not be better to have the style labeled \pc always act the same regardless of where it is found?)

I’d be interested in the community’s thoughts on this.

Yes, that is how I currently handle this.

But a separate PDF leaves out the automatic copyright information for illustrations PTXprint brings. And it can mean the working copy of the front matter is kept in a Word document to generate the PDF, and so is not archived with the Paratext project. That can allow the front matter to become stale or lost.

The ideal solution is for all things relevant to scripture development, checking, revising, tracking, formatting, and publishing (especially for trial runs of scripture portions)–which includes relevant front and back matter too, to be handled within the Paratext context. And our tools then work to extract that information in usable ways.

Product design emphasizes that markers should have specific tasks, and not be used generically. So it seems safer to not have something which applies to scripture text also apply to anything in the front or back part of a book, because then tweaking something for one place can have unexpected consequences elsewhere.

But I realize adding new markers carries its own set of pain and suffering!
So, i’m just thinking out loud here, to see how translation could become easier, and more seamless, and sustainable into the future.

@mjpenny Thank you so much for taking the time to put this together! I agree with David Coward re. making it seamless to do all of this within Paratext so all we need is our data, Paratext, and PTXPrint to get good quality trial copies.

I agree, if the goal is to make this easy to use for all users (not just typesetters), then having the ability to do it all within Paratext and PtxPrint is important.

I wonder if it’s possible to create content in FRT that would apply to any scripture portion we want to print.

We want to be able to quickly produce printouts of various books and combinations of books. PTXPrint makes that easy on the basic tab. E.g. I can print 1-3 John and Jude one minute and the Five T’s a minute later. But if I want to print front matter with them, I have to change the contents of \mt and \mt2 in the FRT book in Paratext each time I change what I want to print. That’s probably no big deal once I and our team are proficient at using PTXPrint and have a good set of saved configurations. We don’t need front matter when we’re doing an informal printing anyway, just when we are actually publishing. But when we are working on typesetting several books, I anticipate completing some and then going back to do them again after I discover I want to change something because of what I learned in typesetting the next set of books. We are not publishing the entire backlog as one publication but as several. Because we have a large backlog of books to typeset and probably won’t print any until we print them all, I’m likely to encounter this problem many times: If I want to produce a new PDF of something I have already done, I have to go back and change those title fields again, then change them back.

I wonder if there is a way PTXPrint could auto-generate the contents of those markers based on which scripture books I am printing. And maybe some of you have another suggestion for making this easier.

We face the same issue. And ours has a “Preface” (in 3 languages), which makes reference to the book’s title as well, so that is a tricky bit, unless these book names can use places-holders made into special fields (for the various languages), like the special copyright field does.

Our title page has to have the vernacular book name, but also have everything in the national language as well. Same with the copyright page. And those preface blurbs I mentioned from the translation team. All of this can be kept in the FRT “book” and manually tweaked as needed.

But we also have “letters of introduction” (or like sponsor letters) from the the main church and local organization that sponsors the translation. Those are a bit tricky, with logos in the letterhead and signatures with seals too. So these two pages would be better served as kept in two PDF files and loaded in where needed, if there was a way to put in a PDF link in the FRT book.

Anyway, Mark’s idea for page breaks in front matter was very helpful! Very glad to see progress in this part of the product. (Our Back Matter materials also needs work, like the maps have never worked right through PTXprint, etc. etc.) What PTXprint does now is pretty amazing, so we tweak the rest as needed. One step at a time.

As we think through how to best support these needs, I’m wondering about a couple of options:

a) Each configuration would have an option to store its own local FRT book, which might initially be copied from Paratext’s FRT book, and be config-specific - thus removing the need to keep changing the FRT file in Paratext for each different config you print from. The advantage of this approach is that it is simple to implement, and you’ll get exactly what you’ve specified in the local FRT specification. The disadvantages of this approach are:

b) Another option is to keep using Paratext’s FRT book, but allow the configuration to change/update what is in there. Something like FRTbookchanges.txt which fills in the FRT at publishing time. So imagine a system where we have a single project-wide FRT template with some (user-defined) codes like <MainTitle>, <SubTitle>, <CopiesPrinted>, or even something specific like <MainTitleIndonesian>, and <MainTitleVernacular>, and then the rest of the FRT book would contain the material that needs to be in ALL publications.

The PTXprint settings could just list the found in the FRT book and allow you to fill those in. We could get fancy and specify vernacular, regional, national, international for each of the codes, or just keep it simple as follows:

The obvious advantage of this idea is that the configuration only needs to store the bare necessities (i.e. what is different for this particular publication). It would also allow you to tweak or re-arrange the layout of Paratext’s FRT book, and have all configs follow the new/updated layout. The disadvantage would be if you are trying to have different kinds of front-matter layout (say, a story-book format of a module, and an official-looking Luke+Acts publication for use in church - each of these may need a rather different FRT definition, although many elements would be similar). Another problem with this approach is that the FRT book wouldn’t work properly for Paratext (having been hijacked by PTXprint-specific codes), although some simple PrintDraftChanges.txt rules would help it work fine in Paratext.

In BOTH cases, all the usual \zimagecopyrights, \zcopyright, \zlicense kinds of codes would also work as normal. And I’m not sure if this is possible, but it would be great to be able to say things like:

What are your thoughts on the above options? Hit Reply and tell us which you prefer and WHY?

I like the first option, which keeps PtxPrint FRT and Paratext FRT separate (even if initially copied). That goes along with the model that PtxPrint is for less formal printing.

(Side note: I have to constantly fight the urge to type PtxPrintf. I guess the string PtxPrint triggers buried Programming memories)

@david_coward’s desire for smaller font in the front matter.
I’m just catching up on this after not having much network access for a while. I think the ‘best’ solution at present - at least for ptxprint’s current state and to maintain compatability with current USFM - is to have the front matter (or different chunks of front matter, even) within milestones.
e.g. with a custom milestone \zfrt-s\*…\zfrt-e\* Once that’s in the USFM then you can apply formatting to everything inside or just to specific markers:

The above should make everything inside the section marked like that use fontsize ‘8 fontsizeunits’ except \s1, which uses ‘10 fontsizeunits’ and is dark red / brown.