We have included a few relatively low resolution map images in an OT app. They are placed on separate pages in a .docx file, then loaded as a separate book (in the Appendix section), so each map appears in a separate chapter.

The maps are very legible on my fairly large screen phone, but I’m not sure how they would appear on small-screen phones. I can get a little more space by double-clicking on the map and going to full screen mode. But I can’t pinch-zoom to zoom in on a part of the map. Is that not a thing in Scripture/Reading apps? In this particular case, it would be helpful, but I can see how implementing that might open up a Pandora’s box…

Yes, you could create a simple SFM file and then you have the possibility to zoom into these images. We have done that in some apps but the images should have a fairly good resolution. Here is a sample SFM file. You need to add the images in SAB > Images > Illustrations 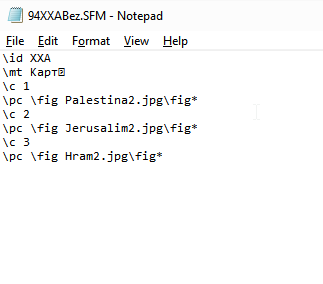 Here are two screenshots from an iOS app that uses this way of adding maps:

Thanks for that information. In my case, I was importing a .docx file instead of an SFM file, which produced something like this:

Since it was using the \img marker instead of \fig, I decided to create an SFM file which used \fig, and import the images into the Illustrations tab, and now I am getting maps which can be zoomed into. Note that I can’t zoom right when I arrive at the page with the map. I need to tap on the map to select it, and then I can zoom. I assume that’s the same thing you have to do?

Also, as a side note… one of my maps wasn’t showing up in the app, and I noticed that one thing that was different was that it had a hyphen in the illustration file name. I removed the hyphen, and then the map showed up just fine. Could @mcquayi test that, and add it to the things to fix if it’s a problem? I’m pretty sure we should allow a hyphen in an illustration file name…

Well, @mcquayi I was able to test another map in a different app that had a hyphen in the file name, and it worked just fine. So I guess let’s just chalk that up to user error. I’m working in both Roman and Arabic script versions of these maps, so maybe I imported the wrong script version in the illustrations tab…

Glad it works. Yes, regarding the zoom, it only works after you tap the image first.