Is there any way to tidy up the Download Automatically message so that it wraps onto the next line? See picture: 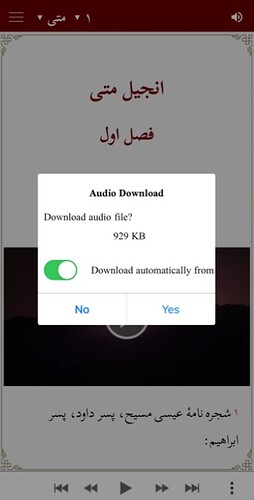 I am wondering if this is because the last released build was built with XCode 12 and didn’t yet have the iOS 15 support. I tried it on my machine and it appeared ok. Here is the screenshot from mine:

Thanks for that idea - it was a good thought. Unfortunately 9.1 showed the same thing.
I’ll DM you the ipa file.

I found the issue. Turns out it had to do with you using the ScheherazadeNew font, which of course is perfectly fine. It is just that that font has very wide interline spacing and when the text attempted to wrap, it was too large for the box that the text was in. I have checked in a change which adds more space to the bottom of the box so that there is room for it wrapping. This will be included in the next release.

That makes sense - thank you. The modification is appreciated.