Someone contacted me yesterday and said that the book grid worked when pressed, but contained no text?
The app was built several months back with SAB4.5 and has worked on all phones tested before this.
Any ideas? Is this a known issue?

So when they touch the book menu and that menu is set to grid and not list, there is no abbreviation text in the grid boxes.

I’d want to see the project to see if it is reproducible.

One possibility is that all previous phones had a system font that handled the text but this one phone comes from elsewhere and has no system font for that character set. Though I’d expect to see tofu (square boxes) if that was the case.

Grid box is there but no text is in box, but touching grid box works as expected. So it only affects text display.

I received an email from Mark Penney, he says it is from using Annapurna SIL Nepal font newer than v1.200. He and one other has had the problem as well. I will rebuild with 1.200 and test on the user’s phone later this week. 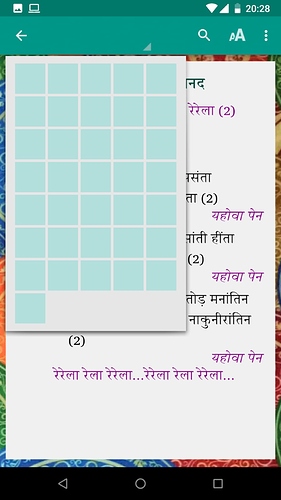 ! (And I have the fixed version if you want the latest APK).

Is there a workaround for this? Or do we no longer support android 8 with our newer fonts?