How do I transcribe in a right-to-left script?

A user wrote with this question that when they click in Word, they can type in Arabic. They can copy text from word and paste it into the Transcriber but how do they set up Transcriber to transcribe an audio file in a right-to-left script? 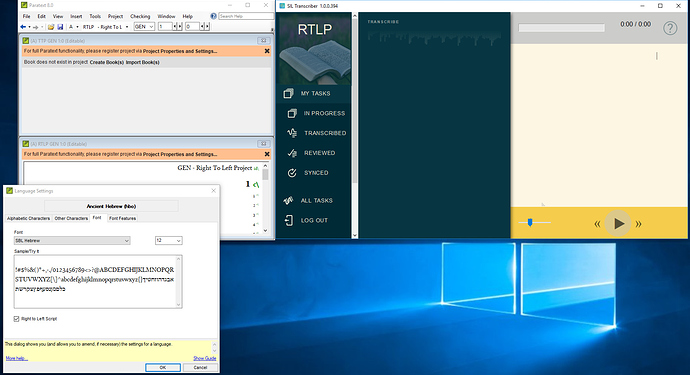 I went to SIL Transcriber and I user the Make a new Project item. When it came up with the list of Paratext projects, I chose RTLP. I added an audio file so I would have at least one task. Now when I open the main screen, you can see that the insertion cursor is on the right side of the screen. This is because the Transcriber is expecting Right-to-Left content to be transcribed.

So the principles are:

In a future version, we hope to display the language (or BCP-47 code of the language) that is being used for the transcription. We may also allow the user who is working on a project that is not associated with Paratext to change the transcription language, its code, and direction. For now, to transcribe in Arabic (or any language using a script similar to Arabic), create a Paratext project with these settings and associate the Transcriber with this project.