I used IconKitchen to create the different sizes of an icon for an Android app. I drag-and-dropped the generated zip file into SAB. All icons sizes appear in SAB > Images > Android Icon (Legacy). However, on older phones including Android 7 the resulting icon looks a lot smaller than normal icons. I found that transparency is added around the actual icons. Did I do anything wrong in IconKitchen? I don’t see a setting that I could have changed to get a different result. 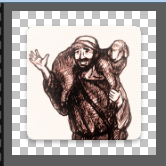 I know what you mean. I noticed it a couple of weeks ago and wrote the developer of icon.kitchen about it. I just see now that he wrote me back. Here’s my thread with him…

Hi Roman, I love icon kitchen! I just noticed however that the legacy android icons that it generates have empty transparent space around them, which makes them smaller than typical icons. Is there a way to remove this space?

Hey Neil this follows the legacy icon sizing guidelines. I recall it being something folks wanted with the Android Asset Studio, but I decided against it because it would conflict with stated guidelines :-/

I can’t see why Android Asset Studio guidelines would want transparent space around the icons. Maybe tomorrow I’ll take a look at the guidelines.

I had a look at the documentation on the Google Android Developers site (Google Play icon design specifications  |  Android Developers), and have to say that it is not very clear at a glance. Upon several read-throughs, and reading other web pages about it, I see that the sizing-down of icons to 75% is what Google will do to a legacy icon when displaying it on an Android 8 or above phone. It seems that app developers should not size-down legacy icons, but rather make sure to provide an adaptive icon in app bundles to maintain optimum icon sizing. This Google sizing-down of icons only has to do with Android 8 and above, and not legacy phones. Legacy icons should stay at full size.

I wrote to Roman about this. Hopefully he is convinced and will be willing to remove the transparent space around the legacy icons that Icon Kitchen is outputting.

Hi Neil,
Thanks for looking into this, really appreciate it! It’s good that someone tells them about it, they should fix this.