Can the option be added into SAB to have the Language & Layout box visible at initial launch of the app?

This feature is now an essential need in an Android and iOS app our team has built for 7 languages (with many more languages we want to add in). In this app, the languages are located in separate book collections. A Language & Layout box visible at the first-time opening of the app would allow first-time users to quickly get into the app in their language, rather than having to figure out how to access their language from the navigation bar Language & Layout. We’ve found that the lack of this feature has made it difficult to get started with our app for the thousands of people who now have it (13K app downloads and growing rapidly).

This feature would be GREATLY appreciated.

We love SAB and are thankful for all that you guys continue to do to make it great!

Good to see the post. I have posted the same request today, but after reading your post, I have removed my post.
It will be more and more beneficial for the user to jump to the desired language instead of visiting setting and language and book collection pane.

Our needs are simple so I just have one menu for languages: 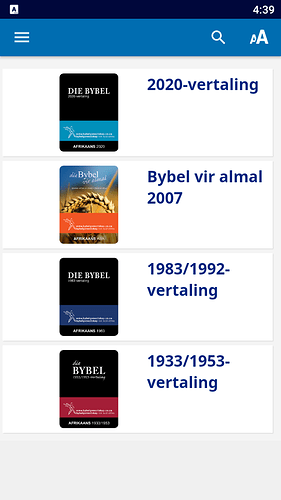 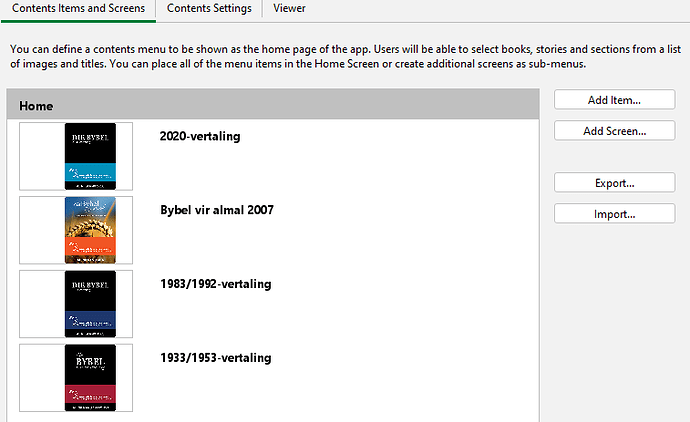 Each links to GEN 1:1 for that translation.
Instead they could link to a Screen with items that links to sections
e.g. Gospels → MAT 1:1

Also, the name of the Contents Menu listed in your app’s menu can be changed under
Interface > Translations > Menu_Contents

The Contents Menu can be set as the “Launch Screen” but I prefer to let the user continue where they left off reading and use the app menu to get to the Contents Menu.

Thanks for the suggestion @GregAshleyCooper. For many apps I’m sure it would be a good way forward. Unfortunately it is not a solution for our app. Users of our app only need to set the language once (in Language and Layout) - upon initial startup of the app. After they have set the language, they will never have to use it again. For this reason, it doesn’t make sense to have a language contents menu in the way that users are faced with as they work their way around the app.

For some it might be useful to link this with the interface language as well.

If you have the setting set to “Go to the book the user was viewing previously” as shown, you would only see the contents menu at start up once, the first time you started the app, unless you press it from the slide drawer. And if you set the navigation item to show the menu button rather than the back arrow, it doesn’t change the normal screen display. That sounds like fairly close to what you were asking for. What am I missing?

Thanks @david_moore1. If that actually works, it sounds like it could be closer to achieving our desired end result. BUT, for us, I feel that it would be clunky to have multiple sets of identical contents pages built into our app, with the only difference being the target destination of contents items. It also has the BIG downside of giving us a lot more work! We have 100 contents menu items in the app and 7 languages. That means that for each language I would have to create 100 new contents menu items with new target destinations for every content item. We plan to add many more languages into the app, and it would just be so much nicer for the app to have that “Language & Layout” box visible at first open of the app.

It makes the most sense to me to be able to select language from the Language & Layout box rather than in the contents menu. Currently we only have the Single Pane layout enabled in the app, but we will may likely want to enable the Two Pane and/or the Verse by Verse layouts for users to reference more language translations at one glance… this is another argument to keep the language selection in the Language & Layout box and not put it in the contents menu.

I think that people who have built Bible apps with multiple languages and translations may also find it great for the Language & Layout box to appear at initial opening of the app. This helps users right away set up the app the way they want it. For example, if a Bible app for the languages in a country was produced, new users would only want the app for one or two languages and not the 10 or more others contained in the app - so that Language & Layout box at initial startup would be useful for them.

To me it seems like this feature request could be quite easy to add in. Or am I wrong about that?

Thanks @david_moore1 and @GregAshleyCooper for thinking critically through this with me. It’s good for creativity sakes and it forces me to examine more carefully what I’m after.

To flip my idea around, you could try adding an item at the top of your list linking to a languages Content menu screen with the different languages. 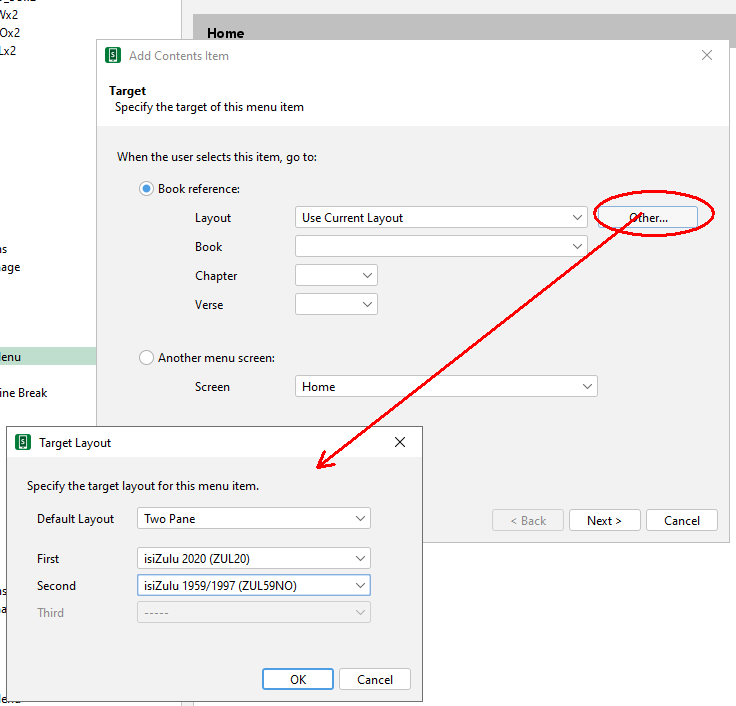 That might be an option for some people’s apps.

I really like Language & Layout. It’s simple and works great. I love the contents menu too! It just seems that in the case of our app, it will complicate things unnecessarily and make the app less versatile by putting the language selection in there.

Neil, yes, this is something we hope to add in SAB in the near future, including a new look Layout chooser screen.

Oh, that’s great! Thank you. Look forward to that

@richard While you’re in that area of the code, I wonder if there could be an option to (also) switch the interface language/script (automatically) when they choose a different layout/language.

Richard, thanks so much for adding in this feature! About a month ago I saw it in 9.1 but found a bug and didn’t have time to thoroughly test it till now. So now after testing, it seems that with Bible apps this feature is always working, but it doesn’t work with Picture Story Book apps.

I also see that since SAB 9.1 it is now possible to have an app’s interface language automatically align with the user’s phone system language. This is awesome! Unfortunately though, I’m seeing the same behaviour in that this is working for Bible apps but not for Picture Story Book apps.

If you need an example app to test these two issues, I can gladly send one to you. Hopefully it is something easy on your side to get going. Thanks so much for adding in these great features!

@NeilZubot Yes, please feel free to send me the app project that is not working properly and I will take a look.