Having an issue where offline videos are not playing. It is like SAB can’t find or doesn’t know how to handle both YouTube links and the same video marked as offline. The plan is to distribute the videos (mp4) on SD card, external folder as well as have the videos linked to YouTube in the instance you don’t have the offline media. I tried to attach the screen shots.

The online videos work fine. However if I disable internet, the video is not played even though it is saved on external folder and linked to the folder as stated in the video settings. Nothing happens to the video in the app.

I read a previous thread from Ian McQuay reply about an issue with both online and offline link videos. Side note, I have the same setup for Audio. FBCH online (download and play) and also mp3 offline chapter audio. Both options work fine. However, I can’t get the offline mp4 videos to play. 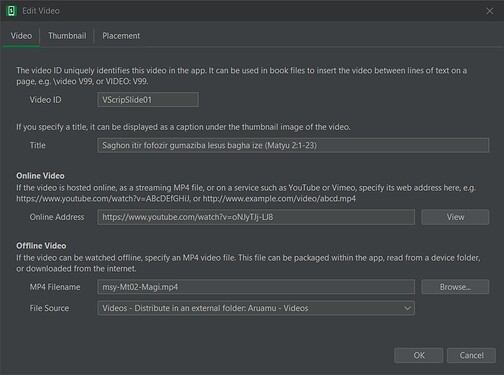 @Tyler_Hewitt I have the same issue with 9.3. So I am sure that is a bug. I wrote it up and it has been fixed in version 10.

Thanks Ian.
When will v10 be released? I’m developing this Bible app for a Dedication for Aug 4, in two months. It would be great if the fix was released before that if possible.