Our project has two scripts that we plan to bundle together with SAB into a single app: a Khmer-based script and a Roman-based script. Each version uses “native” digits (Khmer numbers for Khmer-script, Arabic numbers for Roman-script).

HOWEVER, in our Khmer script version, we enter all number as Arabic to make it easier to proofread, and when we output, these are changed to Khmer. This works great for our PT > PTXprint and PT > InDesign workflow, but it isn’t working for SAB, because SAB applies Regular Expression changes to ALL the “books” in a single app build. So if we convert Arabic numbers to Khmer, the numbers in the Roman project will also be replaced.

(Note that selecting “Khmer” as the “Numeral System” for our Khmer-script project converts all the numbers after \c, \v, and \r. But numbers in crossreferences (\xt) are left as Arabic numbers.)

Is there a workaround available (without having to process the files outside of SAB before building the app!)? Or could a future release of SAB make the “Changes” tool book-specific (by “book” I mean a project, rather than an individual book of the Bible).

So you have two collections.

For each collection you would set the Numeral System under the Styles tab.

But the option only fixes numerals after \c, \v, and \r. It has no effect on numbers after \xt (cross references).

I fixed this with a Python script that found only the numbers in the text and replaced them.
I had a similar problem in that my Kurdish usx files (modified Arabic script) had Latin numbers in the cross references (chapter and verse numbers), in the footnotes (a cubit = 0.5 meters) and sometimes in book introductions (written between 60-65 AD).
Here are some example pictures. 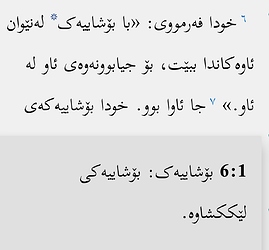 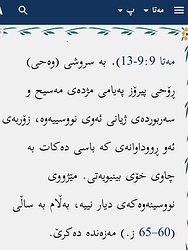 Screenshot_20200922-163752_PertukekemPlus1289×1707 303 KB
I don’t know why the translators did it this way but they just did find+replace in InDesign before publishing. In the actual text they always write out the number, (ie Jesus fed the five thousand).
I tried the find and replace feature in SAB but as you say it replaces all the formatting numbers as well as the numbers in the text which makes it unusable. I concur that it would be a useful feature if SAB would only replace things in text that will be displayed. What if you wanted to change the word for ‘judge’ but didn’t want to change the name of the book of ‘Judges’?
My friend helped me fix this with a Python script, he would be happy to either send that to you or to process the files for you and send them back to you. The only thing it messed up was chapter and verse numbers greater than 99, so I used Notepad++ and find+replace to fix Psalms 100-150 and Psalm 119:100-176. This only took a few minutes.
mcquayi September 21, 2020, 10:53pm #5

Ok the Collection Numeral System should fix all relevant numbers.

I have written this up in the bug list.

I added a couple pictures to my previous post of what it looks like before running it through the Python script. The verse numbers are Eastern Arabic as selected in the Collection Numeral System, but the numbers in the actual text (footnote and book intro) are Latin.

I have added this as a bug report.