I’m having a lot of trouble resizing the SAB window and/or moving it to a second screen. It works, just with lots of hassle and very slowly. Typically I use the standard Windows shortcuts of Win-ArrowKey to move and resize programs quickly or minimize and maximize them. But those shortcuts don’t work with SAB in the same way that the do with every other program I have installed.

Is there something non-standard with the windowing system that SAB uses, or have I set something up wrong?

I suggest trying WinSplit Revolution. Once you have setup your grids (if necessary), you can use shortcuts to send SAB to a specified section of your screen (e.g. top-left quarter; right third; screen 1 or 2; etc). There is more control than Win + ←↑↓→

SAB is a Java application. I think this is the issue.

I have multiple screens and have no problem moving between screens. My screens are all 1080high.

Do you have Higher resolution screens?

Outside of the Ctrl-Arrow shortcuts, though (which never work), things are frustratingly inconsistent. As in, I can’t create repeatable errors. Sometimes it works fine; other times it just won’t move over. Today I turned off the external screen while SAB was open on it, and the SAB icon was in the taskbar but there was no way for me to bring it back on my primary screen. After I killed the program, I recreated all the same steps, turned off the 2nd screen–and it jumped back to the primary one just like a normal program.

SAB is running on Azul Java 11 included with the installer.
I saw an unrelated Java product have issues with UHD display. I also saw MacOS Java app on UHD had issues too.
I’d assume it is a Java-UHD issue. I doubt we can solve that.

Can you resize SAB to something very small then move it more easily?

I was hoping someone would say that I had something set up wrong, but I suspected (as it seems it’s been confirmed) that the problem is with what SAB is built on top of.

I can work around all the problems. It’s just slower and clunkier than most programs.

Yes, using the mouse to drag the window to a small footprint helps moving it to the external screen.

I’ve now found a repeatable problem (and, likewise, I’ll just avoid doing this). If SAB is on the external monitor and that monitor is turned off before the hdmi cable is unplugged, SAB goes into a minimized/hidden state and the only way to deal with it is to kill it in the task manager or turn the external monitor back on.

If SAB is stuck in the position of the second (off) screen, try this:

This won’t work if something has bound the Alt+SPACE global shortcut (e.g. PowerToys Run), but has worked for me for many years, and still does.

Again, try WinSplit. It can be installed as a portable app.

Thanks that is useful.
The Shift right click does not offer Move for this app. Your tip does work.

Thank you for the key commands to move the windows. I hadn’t know about that. Now it’s just a question of whether I’ll use it enough for it to become habit for me.

The key command doesn’t seem to work if the program is fully maximized, but I discovered that I can use Alt+space, r, to un-maximize it, or I can use Ctrl-downArrow. It ends up Ctrl-Up or Down works, just not left and right. Incidentally I found a bug report in openjdk expressing this exact behavior, but it looks like it never got solved.

And thanks for the suggestion to use WinSplit. I doubt it will be worth the trouble for this one program, but I’ll keep it in mind (I’ve experiemented with PowerToys FancyZones, which I suspect is like WinSplit in that it allows for more differentiation in where windows can go, right than just 4 zones like the Windows default).

Sorry to carry on about WinSplit, but I believe in using tools that make working with SAB easier.

I am forever switching from 1/3rd screen to 1/6th on my larger screen (sometimes I rotate my large screen to portrait which adds to the fun).

WinSplit default uses the numpad on a full keyboard so works with 9 position (3x3 grid) shortcuts.
You can change the shortcut keys to whatever you want (which I need to do now that I have migrated to a laptop keyboard - thinking of a w-a-s-d variant). 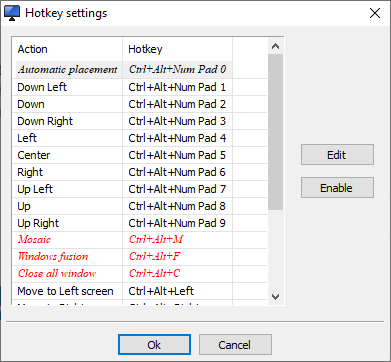 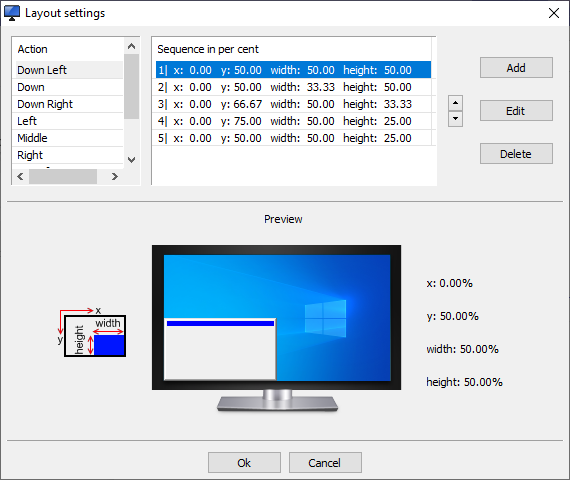 and then you just cycle through the shortcut until you get the size you want.
It works very quick and easy and consistently (all programs), once set up.

e.g. Down Left (Ctrl + Alt + 1) clicked multiple times
(you just keep Ctrl + Alt down and click 1 repeatedly) will cycle through: