I am uploading a brand new app to Google Play, via Scriptoria. In Scriptoria, I can see in my app details that the State is Startup Workflow Completed (as of last night). I have nothing in “My tasks.”

In the Google Play Developer Console, the app status is “Draft.” In that app’s dashboard, I scrolled to the section called “Release your app”. It says “Complete the Initial setup tasks first” and “1 of 4 complete.” Below that:

None of the four items are clickable, but the last one has a mouseover that says, “You need to create a new release before you can roll it out.”

In the Countries/regions section, for each country or region it shows two tracks- production, closed testing. When I expand a country, it says “Production, Alpha.” All 173 are selected.

What do I do now? How do I get my app to Production?

Thanks for your help.

(Side note: Here is a handy reference that defines all of the App statuses:
https://support.google.com/googleplay/android-developer/answer/9859751?hl=en#zippy=%2Capp-status

The steps to complete are in the Workflow. The Make It Live step had a long list of tasks that you needed to complete. Did you do those? Here is a screen shot: 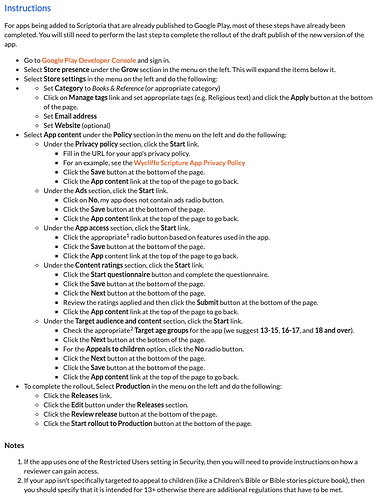 Thanks so much! With this printscreen, I was able to get my app to App Status: Production" and “Update status: In review.”

I looked all over in Scriptoria and could not find the instructions listed above. How is this list supposed to be found?

Once again, thanks so much!

P.S. In the App Content section, Google now also asks if the app is a news app.

Also, just for documentation purposes, I at one point was told I had to complete my store listing for my app before publishing. At first, I thought that it was wanting me to upload print screens for tablets. But in fact, I had to remove English from the list of languages, since I am not planning on publishing app information in English on Google Play at this time.

This list of of instructions are part of the Make It Live step of the workflow. See the workflows on the About Scriptoria page. You are using the Android App to Google Play (Low Admin) workflow. This is part of the initial workflow. It is not needed on rebuild.